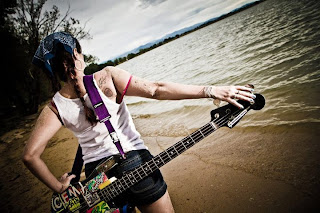 My tattoos are for things that heal me, for things that hurt me. They are for things that inspire me, and things I aspire to be. They are dates, people, dreams, and loves. They are beautiful because they are my life story, written out for all the world to see. And some of them written secretly, just for me. They are positive energy and negative space. They are freeing and grounding, liberating yet offering definition. I have lived to earn each of these tattoos. They have lived me. I have never felt more beautiful than when complimented on one of my tattoos.
I am an artist
A dancer
A teacher
A daughter
A sister
A friend
A mother
Posted by Aimee Heckel at 9:36 AM No comments: 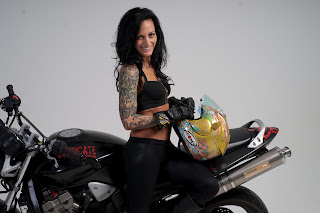 Betty Rocker: On Becoming a Healthy Lifestyle Jedi and Wielding a Flaming Sword

I got my first tattoo, a sleeve on my right arm, the year I was 31. "Go big or go home" is what everyone who hears that story always says to me. Ironically, people had been asking me if I had any tattoos since I was about 20. My crazy pink and black pixie haircut, love of adrenaline sports and rocker style, combined with a constant desire to bake healthy goodies and do food science had quickly earned me the moniker "Punk Rock Betty Crocker."

The idea that tattoos go hand in hand with Anime haircuts, motorcycles and certain other elements of (my) self-expression was so ingrained that I was never surprised by the question -- though the people who asked were surprised when I said no.

Naturally their second question was always, "Well, what are you going to get when you get one?" I never had an answer.

I always wanted one, or some... but even back then I considered wearing "permanent art" as an outward expression of part of my soul -- and didn't know who I was yet enough to know what part of myself to share with the world.

I started Officially Adventure Seeking at 19 when I left my full ride to Tufts University for a six-month volunteer stint in the Alaskan wilderness making birch syrup. I traveled around the West Coast for a few months, and slowly made my way back to upstate New York to work for a season in the family vineyard.

It didn't take me long to get restless in one place, so I packed up my faithful dog and drove my truck to the sunny south. I worked as a flight attendant in Fort Lauderdale, studied the culinary arts while serving in fine dining restaurants in Miami, went back to school for a couple more years, and took off again for six months to travel on next to nothing all over Thailand, Israel and Europe.

Given my wanderlust, you won't be at all surprised when I tell you that I met the artist who would pen my first ink at a motorcycle race in Hastings, Nebraska. He had tattooed a half sleeve on his right arm -- with his left -- that was unlike any art I'd ever seen. Turns out he was a painter turned tattoo artist, and his drawings and paintings combined a surreal beauty and fantasy world that spoke to the comic book nerd part of me who fights dragons and constantly carries a flaming virtual sword.

By then I had moved to Colorado -- I'd been dreaming of the Rockies since the first time I saw them on my way home from Alaska all those years ago -- and I had learned to trust the internal guidance system I'd been navigating with since I began my adventures.

Getting tattooed felt more like exposing the deeper part of me -- like the needle was uncovering what was underneath rather than leaving marks. Finding the right artist was just like finding the right key to a door you'd always wanted to unlock.

Get a chance to see beneath the surface and anyone who looks different on the outside has a lot more in common with us than we'd ever realize. Nobody questions Batman's bat mask, Superman's cape, the Hulk's green skin, or Storm's white hair -- their different appearance is a visible symbol of what they stand for, and we've seen behind their costume to the real people we can all relate to. Superheroes, the tattooed, the un-tattooed, tall, skinny, short, shredded, old or young -- the key to seeing their humanity lies in your ability to unlock your own.

Visit Betty Rocker online at http://thebettyrocker.com for healthy cooking and fitness adventures in a Jedi lifestyle of AWESOME
Posted by Aimee Heckel at 2:09 PM No comments:

Two grandmothers who left their mark on their granddaughter. 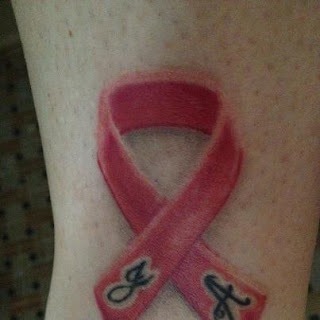 I got this in March after I found out my grandmother Adele was losing her battle with breast cancer. I lost my grandma Janice when I was a baby.
Posted by Aimee Heckel at 3:40 PM No comments: 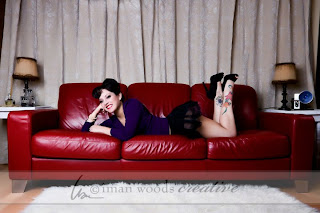 I have always been in love with art and expression. I’m not the best artist, but I love creating things or making them pretty because it makes me happy. When I turned 18, I had already known I wanted a piece of art on my body. I didn’t know it would turn into a passion. I find it extremely beautiful when people have artwork that means so much to them on their body. I have a story, a meaning, or a feeling for each tattoo, so I know those people have a reason, as well. I don’t regret being tattooed and I never will.I am a mother, wife, employee, and friend. I can be labeled a lot of things, but being tattooed does not affect any of those aspects of my life. My daughter appreciates my artwork and loves me regardless. She doesn’t see tattoos as a negative thing. Her father and I are covered in them, and we are raising her to never judge a person by what they look like. I work in an office and do not feel the need to cover any of my artwork. No one has ever asked me to either. I appreciate the fact that I can be myself and the merit of my work is not judged upon the fact that I have tattoos. You meet some amazing people, when you stop living within boundaries society creates. I have learned to be open to everyone. I will smile at you if I pass you on the street and I’ll say hello if you smile back. It’s not hard to see people when you aren’t looking at their skin.
Posted by Aimee Heckel at 11:28 AM No comments: 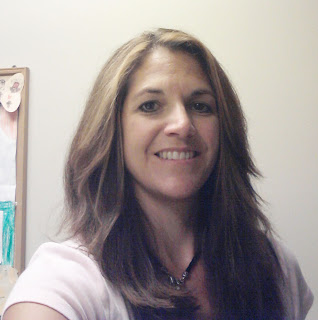 "Don’t judge a book by it’s cover." Whether it’s a flower on your ankle, your child’s footprints, teardrop on your face, spider webs on your elbows and neck, there is usually a story. If you took the time to ask about the tattoo then you would get to know the person.

My name is Polly Ashley and I have worked as a paralegal for a prominent criminal defense attorney for 22 years. We have represented people charged with a DUI to first-degree murder. Trust me, tattoos won’t tell you anything about a person. I have many clients in my office who don’t have tattoos. 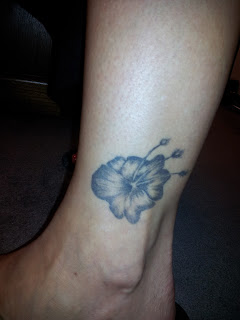 
Posted by Aimee Heckel at 3:34 PM No comments: 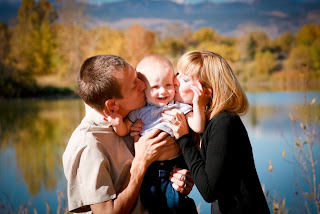 I have two tattoos. One to remember and honor the loss of our first baby, and one to honor the love of my life, my husband. People get tattoos for all kinds of reasons, not just to be tough. Look around, tattoos are everywhere, on everyone. Instead of judging someone for their body art, why not ask them why they got it instead?
Posted by Aimee Heckel at 3:36 PM No comments:

The most recent research shows 40 percent of Americans between 26 and 40 have at least one tattoo. That's nearly half of us. Furthermore, 36 percent of people between 18 and 25 do. Normal people. Successful people. Smart people. Truly, anyone.

Yet outdated stigmas and discrimination still exists, based solely on some people's unfounded misconceptions about the way a tattooed person looks -- completely disregarding the statistics, individual characters and the stories behind the tattoos.

Yes, tattoos are a choice. So is practicing a narrow perspective.

Perhaps the increase in tattoos amplifies some people's already prevailing prejudgments about people who look different than them. It's so much easier to write off a person based on something you, on the surface level, do not understand than it is to actually consider what lies underneath, below the skin.

This website was created after I witnessed an incident of discrimination against the "tattoo demographic," as a whole. This website is intended to help educate and dispel myths that you can even begin to classify people with tattoos in one "demographic," much less as all trouble-makers, all out for attention or in any way worth diminishing based on assumptions; no one deserves that.
Ultimately, this website is not even about tattoos, but it is about the real stories behind each person's surface. This website is not intended to convince anyone that they should get a tattoo, or that they should even like tattoos if they don't choose to get one themselves.
After all, as the saying goes, the only difference between people with tattoos and people without tattoos is that people with tattoos don't care whether or not other people have tattoos.

Got tattoos?
Tell us who you are and send your pic to aimeenews@gmail.com, and we'll share it on this website.